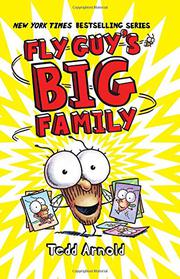 From the Fly Guy series, volume 17

Inspired by Fly Guy’s drawings of “Muzzer” and “Fazzer,” Buzz plants tiny invitations in every reeking trash can and pile of rot in the neighborhood—and opens the door to thousands of Fly Guy’s relatives, after assuring them there are no “swatterzz” on the premises. “Wow!” says Buzz, delighted. “Flies have big families!” Fly Guy too is delighted: “Bruzzer! / Sizzter! / … / Auntzie! / Unkz!” Buzz’s parents are, understandably, nonplussed, but Buzz has it all planned out…even to the catering, as a garbage truck drives up and dumps a heap of stinking refuse in the yard. Out fly the guests to chow down and play amid the noxious noshes. It’s a grand party, but time (as they say) flies, and ultimately the swarms disperse as the garbage is bagged up. As with all the Fly Guy books, Arnold makes the most of the contrast between readers’ received assumptions about flies and Buzz’s total ignorance of them, genially giving the former a 90-degree twist. Page-filling fleets of flies may give some readers (or their caregivers) pause, but it’s hard not to get a kick out of the way the flies tuck into their garbage banquet, and the baby picture of a larval Fly Guy with a pacifier is pretty darn cute.

“Thankz, Buzz!” says the grateful guest of honor at the end. Readers will agree it’s the least a boy could do for his buzzom buddy