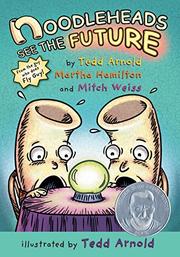 Two thickheaded macaroni noodles prove the old adage: a fool and his firewood are soon parted.

Fools have been called “noodleheads” for centuries, but until recently few have represented the term quite so literally. Mac and Mac aren’t the brightest pieces of pasta in the world, but their hearts are in the right place. Here, the two decide to help their mama out by gathering firewood in hopes that she’ll bake them a cake. As they are attempting to cut the very branch they’re sitting on, a passing meatball points out that they are mere minutes away from bruised bottoms. When his words come to pass, our heroes decide the meatball is clairvoyant and demand to know their future. Drawing on and smoothly weaving together a variety of folk tales, the brief graphic novel describes how its obtuse protagonists single-mindedly seek cake, even as they anticipate death, purchase “firewood seeds” (aka acorns), and accidentally dig their mother a garden. Emergent readers will appreciate the simple text, short chapters, and comics-inspired paneled illustrations. Adults will appreciate the authors’ note, which goes into some detail about each chapter’s folk origins.

Two delightfully dense heroes bring folk tales into the 21st century, and young readers are all the richer for it.