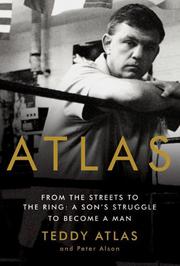 by Teddy Atlas with Peter Alson

Boxing commentator and former trainer Atlas describes a youth spent looking for love and recognition in all the wrong places, until he found it inside the ropes.

In his heyday, the author was known in boxing circles as a trainer’s trainer who gave his charges the hand skills and, more importantly, the head skills they needed to be champions. He came by those skills the hard way. As a boy, starved for his parents’ attention, Atlas took the low road: dropping out of high school, street-fighting, taking to petty crime. He did a short stint in prison. Then he caught a break. Released from jail, awaiting trial, he got a job working at Cus D’Amato’s legendary Catskills training camp. Prison had taught Atlas about fear; everyone feels it, and it can be harnessed as a positive asset, he writes. Boxing camp taught him about discipline. Not that he didn’t occasionally slip back into his bad behavior, which provides much color here—after all, this is a book about confronting your weaknesses. In a voice shorn of pretense, both edgy and polished, Atlas describes trying to instill his brand of integrity in his fighters, a bunch of young men who had their share of emotional problems. He had to teach them to honor themselves, in particular not to cave during rough moments in or out of the ring. If they did, he told them, they would hurt more the next day than they ever would from immediately confronting the problem at hand. This demanding ethos cost Atlas more than one fighter and some significant paydays, but he also won world championships and a sterling reputation. He may soon be even better known as a talented boxing anecdotist.