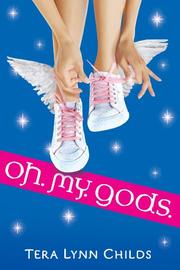 Few situations are more difficult than adjusting to a new stepfamily, but what if they are all descendants of the gods? After her mother’s surprise marriage, Phoebe is whisked away to a mysterious island in Greece where she must spend her senior year at the exclusive Academy. Unfortunately, the fact that her new stepfather is the headmaster is just the start of her problems. In addition to ducking the supernatural powers of her stepsister, steering clear of Hades’s progeny and navigating all manner of mythical problems, she must figure out how to land a place on the cross-country team. Normally that would not be an issue for a talented runner like Phoebe, but the other runners include the offspring of some pretty swift gods, including Hermes himself. Riding the wave of Rick Riordan’s Percy Jackson series (The Battle of the Labyrinth, 2008), the mythological concept elevates the usual high-school dramas of cliques, romances and scandals to new heights. Funny and light, this tale is a romance of Olympian proportions. (Fiction. 12 & up)