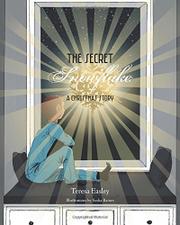 In this debut picture book, a special child must be found in order to save Christmas.

Each year at 4:31 a.m. on Christmas morning, after Santa Claus has delivered gifts and returned to the North Pole, the Secret Snowflake shines “golden rays of Christmas Spirit” into the hearts of those who “believe in the magic of Christmas.” However, the snowflake’s source of power lessens every year. To restore its strength, a noble child of “pure heart” must be identified and brought to the snowflake’s location, so that the child may make a wish upon it. Three types of “mythical snow creatures” protect the Secret Snowflake, each endowed with special powers. The Spirit Seekers, who discover and transport the child, are described as musical “snowflake fairies” who chant in rhymes and sing in high-pitched voices. One of them is underdog Gossamer, a Spirit Seeker whose delicate wings impede her ability to sing high and clear, thereby preventing her from calling for help when threatened by Joy Robbers, who want the Secret Snowflake to weaken and die. Gossamer flies to Meriden, Connecticut, where she discovers a pure, noble boy named Eddie. He makes her wings stronger with his breath, thus rendering her voice more powerful. With the help of Eddie and other creatures, Gossamer makes a successful trip to the Secret Snowflake, waging a great battle along the way. Unfortunately, it’s difficult to ascertain the appropriate audience for this book; the story contains a level of abstraction that younger children may not be able to fully grasp, as well as a large cast of characters and a complex storyline. There’s also far too much reliance on exposition, particularly in the first few pages, which don’t quickly hook readers with action and dialogue. The amount of text on each page is substantial and some young readers may find this daunting. Some of the illustrations, however, are lovely and colorful, and nicely support the text. The story ends on a strong note: Eddie’s wish is unexpectedly wise, and there’s a final, delightful, and surprising twist.

A story that may be most successful as a spirited, animated read-aloud.