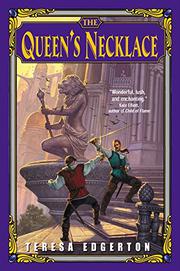 Intensely complicated continuation of the far-future saga drenched in magic and Renaissance European political intrigue familiar from Edgerton’s earlier Goblin books (The Gnome’s Engine, 1991, etc., not reviewed). It’s the 65th century, and a scrappy young girl is discovered living with a humble goblin shopkeeper in a faraway village. The daughter of a banished queen descended from the brilliant, decadent, genetically engineered race of goblins that once ruled the world, Princess Sophonsipa, also known as Ys, was left with a necklace of settings for a series of jewels. The jewels, which have been scattered among ruined, vaguely medieval cities reminiscent of 16th-century Europe, are really goblin technology that can command the weather and hold volcanoes in check. Awakened to her heritage, Princess Sophonispa uses sorcery to seduce and marry the depressed King Jarred of Winterscar, launching a complicated scheme to reassemble the necklace and put goblins back in control over humans. In her way stand the charming human rake Wilrowan Krogan-Blackheart, a soldier of noble birth who has a psychic ability to talk to ravens; his sorcerer-physician wife Lillian, who endures her husband’s philandering because she likes him but can’t stand living with him; the befuddled historian Lucius Sackville-Guillian; a strange religious fanatic named Raith; and a host of other characters, human and goblin, high-born and low.

The characters’ wit and wisdom are unusual for the genre, but the plot—featuring by-the-numbers swordplay, sorcery, and campy villainy—takes far too long to cohere, ending with a few too many loose threads for the next volume.