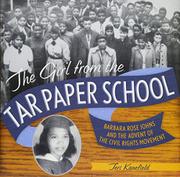 THE GIRL FROM THE TAR PAPER SCHOOL

Barbara Rose Johns and the Advent of the Civil Rights Movement

Kanefield tells the story of Barbara Rose Johns, whose fight for equality in the schools of Farmville, Va., went all the way to the United States Supreme Court.

In 1950, 15-year-old Barbara Johns was a junior at the all-black Robert R. Moton High School in rural Virginia, a crowded school using temporary classrooms that were little more than tar paper shacks, more like chicken coops than classrooms, with leaky roofs and potbellied stoves that provided little heat. Farmville High School, the white school, was a modern building with up-to-date facilities. Sick of the disparity, Barbara led a strike, demanding equal facilities in the schools of her town. Her actions drew the usual response from the white community: cross-burnings, white stores denying credit to black customers and criticism for their “ill-advised” actions. Although threats caused Barbara’s parents to send her to live with family in Alabama, where she graduated from high school, the Moton students’ case was eventually bundled with others, including Brown v. Board of Education. In an attractive volume full of archival photographs, informative sidebars and a clearly written text, Kanefield shares an important though little-known story of the movement. A one-page summary of “The Birth of the Civil Rights Movement” and a civil rights timeline connect Barbara’s story to the larger struggle; sadly, the bibliography offers no mention of the many fine volumes available for young readers who will want to know more.

An important glimpse into the early civil rights movement.