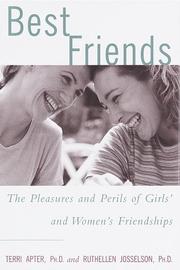 The Pleasures and Perils of Girls' and Women's Friendships

You wouldn’t wish the best friends described by these psychotherapists on your worst enemy. To give them credit, Apter (currently a fellow at Cambridge Univ.; Secret Paths, 1995, etc.) and Josselson (Psychology/Towson State Univ.; Revising Herself, 1996), both experts in women’s psychology, set out to add perspective to the recent spate of books and movies celebrating women’s friendships. They seek a context “that neither idealizes . . . nor denigrates” such relationships. Girls and women can form rewarding and enduring connections, the authors say, but those relationships can also be hurtful and damaging. They discount recent research attributing preadolescent girls’ diminishing self-esteem to societal pressure and suggest instead that “the worst anguish . . . is learned in the neglected but indelible doings with girlfriends.” What follows, despite the authors— attempts at nuanced understanding of why girls fail each other and lessons to be learned, is a litany of anecdotes about cruelty, jealousy, fickleness, and fear. From here on the authors’ own recollections and the agonies of Tanya, Wilma, Rose, Angie, Robin, Della, and Quinisha regarding “the friendship wars” takes over. Ninth graders Wendy and Janet spent every Saturday afternoon together, until one Saturday Wendy had to visit a “sick aunt.” Sure enough, riding a bus that afternoon, Janet spotted Wendy window shopping with schoolmate Sandra. (The story, incidentally, is told by a now 40-year-old Janet.) Thirteen-year-old Rowena listens in on a phone conversation between her best friend and another girl. Rowena is dissed. Clare Boothe Luce’s The Women is but one stereotypical scenario that comes to mind. Boys are stereotyped as well, depicted as solving their relationship problems on the playing field. The authors do go on to suggest that female friendships provide support and understanding that can’t be found elsewhere. The thesis that the turmoil of the adolescent friendship dance is valuable in both learning about relationships and defining self is valid, but this description of female best friends is likely to make misogynists of us all. (For a different look at women’s friendships, see Nina Barrett, The Girls, p. 861.)