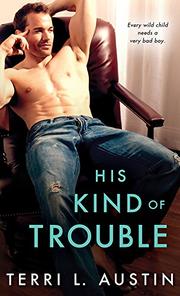 HIS KIND OF TROUBLE

Five years ago, Monica and Calum shared some scorching hot kisses at an inappropriate moment, but Monica has changed her ways and sworn off bad boys, so when Calum comes back to Las Vegas, she wants nothing to do with him—or so she claims.

Monica Campbell used to be a wild child, but she’s done with all that. She’s settled down into a new life, a great job, and a strong relationship. She’s ready to face the world in her business suits and sensible shoes, and if she’s not exactly happy, at least she’s making a difference working for her mother’s foundation and putting her organizational and people skills to good use. So when Calum Hughes motors back into Vegas after five years, she’s determined to avoid him like the plague. Except that they keep running into each other, and their chemistry is hotter than the Mojave desert. And he’s actually a really nice guy, and there’s definitely business left between them. As they fall into an affair, they tell themselves and each other that he’s a wandering player and she’s a recovering poster girl for bad choices, so they have no future together. Except that Calum is discovering that, after a devastating loss, he may want to actually forge some emotional ties, and beneath her straight-laced exterior, Monica is hiding some pretty sexy underwear. With family issues on both sides and complicated emotions of guilt, resentment, and self-recrimination at play, neither Monica nor Calum has much to lose on the surface but plenty to gain if they can readjust their ideas of who they are to access and fulfill long-buried dreams with each other. Some of the devastating secrets are a little overplayed in the buildup, and Monica’s complete suppression of her sensual self seems a little over-the-top given the circumstances. Still, a satisfying read.