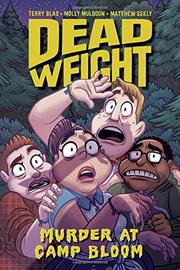 Four teens attempt to solve the mystery of a murdered camp counselor.

Latinx Jesse’s family makes her attend Camp Bloom, a summer weight-loss camp, while black Tony is excited to be with his buff role model, Counselor Cory, who is white. Third-year attendee Noah, also white, wants to prioritize his health and lose weight but is unsure whether he can. One night, Jesse sneaks out to procure contraband chocolate. Noah follows her, and both stumble upon Counselor Cory’s murder. Purely by chance, the crime turns out to have been documented on Jesse’s camera. Noah looks for help from Kate (also white), who finds Camp Bloom a safe refuge from homophobia. Kate includes Tony, heartbroken that his mentor is dead, in the investigation. Armed with a list of the camp counselors and a camp map, the foursome decides to find the murderer. Close-ups of the protagonists convey great emotion and are interspersed with more active panels featuring the quartet and other characters. As the teens work through the suspects, another murder occurs, and the young sleuths nearly become victims themselves. Exacting readers may be disappointed by the lack of clues or clear motives for the murders and by the strange ending. Those willing to forgive these shortcomings will find this lighthearted mystery with diverse characters an accessible, if not entirely satisfying, read.