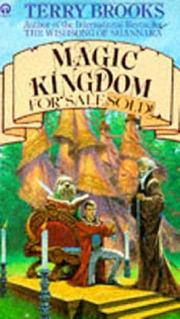 Restless, grieving widower and lawyer Ben Holiday comes across an ad for a "genuine magic kingdom"; intrigued, he pays over a million dollars—and proceeds through a magical tunnel to Landover, an as-advertised property complete with fairies, wizards, dragons, and a magical palace! Then Ben discovers the drawbacks. The throne has been empty for 20 years; no taxes have been collected; the peasants are starving. As king, Ben's only servants are an incompetent court wizard, a talking dog as court scribe, and a pair of hissing kobolds. The royal palace and lands are suffering a blight because the binding magic is failing. The local barons and fairies refuse to recognize his kingship, deeming him merely the latest in a succession of dupes. A dragon is ravaging the countryside, and an evil witch is hatching plots. Even worse, an invading demon-lord challenges Ben to a showdown—and the king's champion, the Paladin, seems to be nothing more than an empty suit of rusting armor. Only the lissome fairy Willow believes in him—and she periodically turns into a tree. Ben's first task, then, is to convince all concerned that he's serious about tackling the job. An amusing and promising setup with flashes of originality, which the prolonged and somewhat heavy-handed resolution doesn't quite match: agreeable material that could have used more wit and a lighter touch. Still, a pleasantly entertaining jaunt, and considerably better thought out than Brooks' ragged Shannara yarns (most recently The Wishsong of Shannara, 1985).