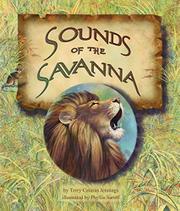 SOUNDS OF THE SAVANNA

Over the course of a day, predators and prey roar, bellow, trumpet, cry, squeal, purr, and sometimes sneak quietly through the savanna in this introduction to African animals and the science of sounds.

The nicely rounded narrative begins and ends with the lion family. Activities and sounds of wildebeests, elephants, vervet monkeys, baboons, zebras, spiny mice, and yellow-winged bats are described in a simple text. Also pictured and mentioned in the backmatter are a python and a milky eagle owl. The animals are clearly identifiable in the illustrations (produced digitally with watercolor embellishment), which also reveal the progression of the day, from dawn through nightfall, spread by spread. Some double-page spreads feature pictures on pictures, close-up images set over more expansive scenes of this important habitat. Particularly striking are two spreads showing the dramatic escape of a larger-than–life-size spiny mouse from an attacking owl thanks to the mouse’s tearaway “brittle skin.” The variety of sound words used will please teachers, as will the four pages of backmatter, which include additional explanations, hands-on activities, and a predator/prey quiz. A Spanish-language version is also available.

This curious but intriguing pairing of science fields from the publishers of Darcy Pattison and Kathleen Rietz’s Prairie Storms (2011) and Desert Baths (2012) will be equally welcomed in libraries and classroom collections.