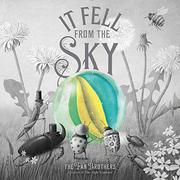 IT FELL FROM THE SKY

When a strange orb falls into their habitat, the Spider commandeers it, constructing “WonderVille” and selling tickets to long lines of curious insects.

The object (readers will recognize it as a yellow-green marble) invites considerable speculation. Is it a gumdrop, a comet, a chrysalis? The Spider, nixing the chatter, asserts that “whatever it is, it most certainly belongs to me,” insisting that the sphere has fallen into his web. He constructs a “Grand Exhibit” to showcase “the Wonder from the Sky.” As lines of visitors lengthen, admission increases from one leaf to two—then more—until visitors cease. The Spider presumes they’ve gone to invite prospective customers. That self-aggrandizing assumption is rendered moot by “the Unexpected Disaster. / A five-legged creature stole the Wonder and took it back to the sky.” (This deus ex machina is a child’s hand.) Time passes, WonderVille reverts to its previous state, and insects return. The Spider, ignored, experiences a nighttime epiphany as stars shine down. “They didn’t hide their light from anyone. Not even a selfish Spider.” Patiently, he spins webs, and “sure enough, more Wonders fell from the sky.” In graphite-gray spreads rife with delicate flora, colorful new “Wonders” (a thimble, pushpin, Lego, and more) captivate the neighborhood—free of charge. The Fans’ marvelous illustrations sparkle with nuance, from lofting dandelion seeds to the Spider’s dew-dropped web. The pro-community message is slightly undermined by the choice to portray a gendered, top-hatted, preponderantly male cast. (This book was reviewed digitally.)