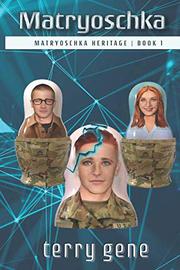 From the Matryoschka Heritage series, volume 1

Alternative pasts and genders arise from a failed quantum energy experiment in this debut novel.

Alexandria Jane Merk is a white Army veteran who, “at twenty-six, had left her soul on the streets of Tikrit, Iraq” when she couldn’t save two young boys. She’s now attending a university in Pullman, Washington, accompanied by friends Quentin Khan, a chubby, Arabic “man-child,” and Katie Jo Parker, a very tall black woman and fellow vet. Alex Jane becomes affected by a physics experiment that causes her to lose “contact with herself,” creating alternative pasts for two separate identities into which she splits. One is college freshman Sarah Beth Merk, who generally feels that life is good, although she has almost-buried memories of a horrifying childhood event. The other is Alexander “Alex” James Monroe, an Army vet with disturbing childhood memories of his own centering on his great-great-grandmother—“Babushka”— and the mental gymnastics she forced him to undergo with a set of matryoschka, Russian nesting dolls, covered with mysterious writing. And Sarah Beth/Alex are similar to these dolls, because she seemingly exists as a “flesh-hued thing” that slips on and off; in fact, she’s “pure energy” and “the most dangerous thing on Earth.” The dual entity, their friends, and government researchers must race to solve mounting puzzles before Sarah Beth loses control. In his sci-fi series opener, Gene posits a complex, what-if scenario with intriguing (if somewhat vague) links to quantum physics. The gender what-if is central and has a remarkable twist, but Sarah Beth/Alex could be expected to explore their state with more curiosity. The nesting-doll image is also captivating although sometimes overly abstract. While the novel is divided into three parts (“SARAH,” “ALEX,” and “SARAH BETH”), plotting gets hard to follow amid the story’s changing identities and past lives; everything seems to happen in a big swirl. Gene’s dialogue is naturalistic, although characterization sometimes falters, as with Katie—too much the cliché of the scary, angry black woman.

While overly long and sometimes confusing, this sci-fi tale remains thoughtful and emotional.