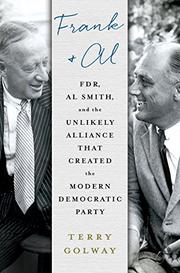 FDR, Al Smith, and the Unlikely Alliance that Created the Modern Democratic Party

Franklin Roosevelt (1882-1945) is no stranger to historians, but Politico senior editor Golway (Machine Made: Tammany Hall and the Creation of Modern American Politics, 2014, etc.) wisely wraps matters up after he became president in 1933. Until then, fellow New Yorker Al Smith (1873-1944) was better known. Born on the Lower East Side, Smith struggled financially, but he impressed the local Tammany boss, who sent him to Albany in 1904 as assemblyman. Though initially frustrated by bureaucracy, he hid “his frustration behind a mask of good cheer” and became a leading reformer. Wealthy and bored by practicing law, Roosevelt fell in love with politics. Winning a state Senate seat in 1910, he concentrated on national affairs, supporting Woodrow Wilson in 1912 and earning appointment as Assistant Secretary of the Navy. Golway dates the “alliance” to the 1920 Democratic presidential convention, when Smith, then the governor of New York, asked Roosevelt to second his nomination. Quiescent for years after his 1921 paralysis, Roosevelt supported Smith for governor in 1922, 1924, and 1926. Running for president in 1928, Smith convinced Roosevelt to run for governor. Roosevelt’s victory immediately made him a contender for 1932. It also ended their alliance. Crushed by his defeat, Smith felt ignored by the new governor. Detesting Roosevelt’s New Deal, he supported Alfred Landon in 1936 and Wendell Willkie in 1940. Historians, Golway included, agree that Smith was the more forthright, unwilling to sacrifice ideals for political gain. Thus, both men hated Prohibition. Roosevelt gets credit for repeal in 1933 when support had weakened, but he waffled when it would lose votes during the 1920s. Smith never wavered, but it cost him.

A fine account of FDR’s rise to power combined with a cradle-to-grave biography of the man who made it possible.