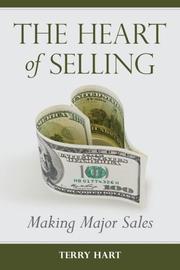 THE HEART OF SELLING

Teaches that building relationships is the key to selling well.

The guide opens with a scene from Hart’s history as a chemical salesperson. The author keeps an appointment with a purchasing agent for a major prospect only to be told, “Erica’s too busy to see you today.” A month later he makes another appointment, arrives on time and is told the same thing. On the third round, another month later, the purchasing agent walks into the lobby, asks him for his price, and when he hesitates, tells Hart that they have nothing to talk about and walks away. With this tale, Hart launches into his premise: Securing major sales requires forming connections with every prospect. He then describes in detail how salespeople can build such relationships, including examples from his own experiences. Interestingly, the first story aside, most examples are interactions with salespeople as a prospective buyer, not as a salesperson. Hart emphasizes the need to ask questions and understand the prospect’s needs, then to use that information to present the benefits that will catch the buyer’s interest. He explains that relationship building between salesperson and prospect allows the salesperson to ask probing questions without discomfiting the buyer. Hart’s advice is not particularly groundbreaking, but he presents it well and with all the enthusiasm of a seasoned salesperson. The primer itself is an excellent example of how to sell: Hart opens with an attention-getting “hook,” presents the benefits of his method while sprinkling in several entertaining tales, uses specific facts and details to back up his claims and then closes by returning to the opening story about how his own method converted this difficult prospect into a loyal customer.

A good basic overview of the theory and practice of relationship selling.