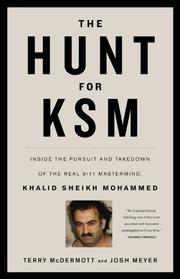 THE HUNT FOR KSM

Inside the Pursuit and Takedown of the Real 9/11 Mastermind, Khalid Sheikh Mohammed

To this day, the bleary-eyed visage of the 9/11 mastermind being hauled off by authorities after a successful raid on his hideout in 2003 remains the most recognizable image of the hated international terrorist. McDermott (101 Theory Drive: A Neuroscientist's Quest for Memory, 2010, etc.) and Los Angeles Times chief terrorism reporter Meyer explode that superficial frame with a taut, espionage-thriller–like narrative. The authors render characters on both sides of the law—the hunters and the hunted alike—in rich detail, ably evoking their clear motives and desires. While Osama bin Laden became the main symbol of America’s war on terror, it was actually KSM who tirelessly traveled the globe recruiting young Muslim men for his ongoing war on the West, directing their actions, outfitting their operations and setting them loose upon an unsuspecting populace. FBI Special Agent Frank Pellegrino was on his heels from the very beginning, when, in 1993, KSM tried to destroy the World Trade Center with a truck bomb left in a tower garage. During that time, write the authors, none of Pellegrino’s superiors seemed interested in his investigations, but ultimately, a decadelong game of cat-and-mouse ensued, marked largely by frustration, futility and missed opportunities.

A surprising, sobering look at one of the deadliest terror networks in history and the American spy agencies charged with bringing it down.