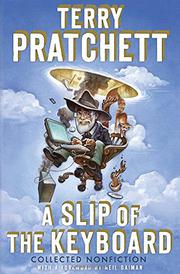 A SLIP OF THE KEYBOARD

The celebrated creator of the Discworld series of fantasy novels offers an eclectic collection of pieces and speeches from as early as the 1970s.

Pratchett (The Long Mars, 2014, etc.), who has Alzheimer’s disease, writes often about his enemy-illness in this thematic collection. The author “went public” with his illness at the time of his diagnosis and has proved a worthy adversary of the illness and advocate for increased medical research. Throughout this inimitable collection, a number of traits and themes emerge. His biting—often self-deprecating—wit is evident on nearly every page, as is his wonder at being the literary celebrity that he is. He most assuredly realizes and is profoundly grateful for his stellar fortune, and he defends his genre both with humor and with passion (he believes that most fiction is fantasy) and repeatedly credits his predecessors and literary mentors, especially Tolkien, whose Lord of the Rings, he tells us, he used to reread every summer. Pratchett writes about his own religious beliefs—or, rather, lack of them. “I don’t think I’ve found God,” he wrote in 2008, “but I may have seen where gods come from.” He also rails against aspects of society he finds repellant; number crunchers and warmongers come in for some special disdain. The author has keen thoughts about education, as well, arguing that we should first erect a library and then build a school around it, and he blasts those who ignore the health of the environment. There is some repetition—not unexpected in a collection ranging over several decades. He writes continually about his affection for The Wind in the Willows, a book that captured and changed him in boyhood. He offers some advice for would-be fantasy writers (“You need to know how your world works”) and reminds us that at the heart of the genre is hope. Pratchett’s close friend and fellow literary celebrity Neil Gaiman provides the foreword.

Lit throughout by the bright star of wonder.