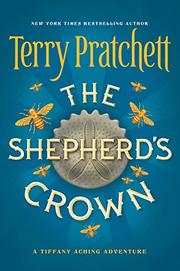 From the Tiffany Aching series, volume 5

The tiny, blue-skinned, kilt-and-not-much-else–wearing warriors will be needed, as the barrier between Discworld and Fairyland has grown thin, and the fairy folk are itching to break through again. As ever, young witch Tiffany Aching is ready to square her shoulders and do what needs to be done—she is a witch, after all, and that’s what witches do—but even the young woman who banished the Queen of the Elves, faced down the hiver, survived a dance with the Wintersmith, and vanquished the Cunning Man will need help. In addition to Rob Anybody and his swarm of hard-drinking, brawling relatives, Tiffany has the support of the witches—even Mrs. Earwig and Queen Magrat—and a character new to Pratchett’s universe: Geoffrey, a boy who “weaves calm” and musters an army of old men who stubbornly resist obsolescence. If Pratchett explored the double-edged sword of memory in I Shall Wear Midnight (2010), here he explores the complicated notion of legacy, as Tiffany must assume her full responsibilities as a mature witch and begin to cultivate apprentices of her own. If some subplots are not as fully integrated into the story as one might wish and there are some bumpy transitions, who cares?

This is the late Pratchett’s last book; even not-quite-perfect Pratchett is something to treasure and can proudly take its place in one heck of a literary legacy.