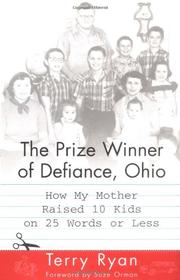 THE PRIZE WINNER OF DEFIANCE, OHIO

How My Mother Raised 10 Kids on 25 Words or Less

A paean to a housewife in a small Midwestern town who saved her ten children from homelessness by winning hundreds of jingle-writing contests during the 1950s and ’60s.

San Francisco Chronicle contributor Ryan describes her impoverished childhood in a close-knit Irish Catholic family, revealing how her mother Evelyn’s optimistic spirit counterbalanced her father’s reign of terror. A talented writer, Evelyn sacrificed her promising career when she married Kelly, an alcoholic who squandered his wages while denying his ten children the basic necessities of life. As a result, the family finances depended on Evelyn submitting witty prose to product promotions contests and winning grocery shopping sprees or expensive appliances (which were then sold) to stave off hunger. (Ryan cites some of her mother’s epigrams, which sing the praises of Pepsodent, Sealy, and Paper Mate, throughout her fast-paced narrative.) Evelyn made researching contests part of her daily routine and managed to win pretty much anything the family needed—including money for health insurance. Her grueling life, full of housework and devoid of friends, was redeemed mainly by the love of her children, who worshipped her. Although this has all the ingredients of a sob story, Ryan balances her tales of childhood trauma with humorous anecdotes about babysitting accident-prone children and wrestling irascible chickens. She also recalls how her mother finally developed a social life with other housewives who, although not as financially unfortunate as Evelyn, also managed to fill their cookie jars with the proceeds of advertising contests.

An uplifting tale of domestic martyrdom, told with a remarkable lack of self-pity, that forces us to put our own sorrows into perspective.