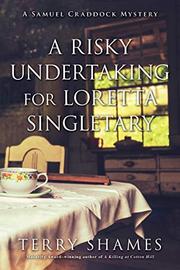 A RISKY UNDERTAKING FOR LORETTA SINGLETARY

The dangers of internet dating surprise the chief of police in a small Texas town.

Samuel Craddock is well-acquainted with the citizens of the area he patrols. Although he’s solved tricky cases before (A Reckoning in the Back Country, 2018, etc.), his newest is especially disturbing because it involves Loretta Singletary, a friend he thought he knew well. Loretta’s Baptist church has recently welcomed a new preacher, Arlen Becker, a stickler for doctrine who seems determined to stir up trouble by insisting that his church have a say in running the popular goat rodeo, whose current leader is Father Sanchez of the local Catholic church. While Samuel ponders that problem and works on a few other minor cases, he realizes he hasn’t seen Loretta for several days. When he goes to her house, there are unwashed dishes in the sink, and her car and a suitcase are missing. Neither her sons nor any of her friends know where she’s gone, but one of them remembers her mentioning a man she met on an online dating site. Samuel’s concern deepens when he learns that a woman from neighboring Bobtail is also missing. With his pup, Dusty, by his side, Samuel works with the detective searching for the other missing woman. Once she’s found dead, run over on a deserted stretch of road, Samuel’s concern turns to fear. Every possible connection between the two women is explored and unexpected secrets uncovered as Samuel, his deputy, and the Bobtail police pull out all the stops in the hope of finding Loretta alive.

A surprise ending makes this entry one of Shames’ best in an enjoyable series that raises small-town problems and their solutions to an art form.