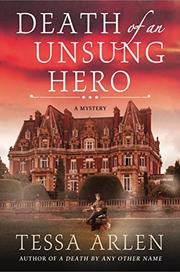 DEATH OF AN UNSUNG HERO

A countess and her redoubtable servant seek the killer of a courageous soldier.

The common sense and discipline that made Edith Jackson the trusted housekeeper of the Earl and Countess of Montfort come to the fore in her role as quartermaster of Lady Montfort’s new hospital. Edith approves of turning the Montforts’ ugly dower house into a refuge for World War I soldiers, wounded in mind and soul as well as body, under the care of the chief medical officer, who believes in talk therapy and everyday activity to treat shell shock. And Clementine Talbot, Countess of Montfort, is a compassionate patron who believes wholeheartedly in Haversham Hall Hospital’s purpose even though her own butler, a fellow member of the gentry, and some of the local country folk see the patients as malingerers. The treatment is definitely a help to Capt. Sir Evelyn Bray, a former man about town who proved his heroism on the French front in a battle he can’t recall. His memory is slowly returning, however, and his brother is on his way to visit as a guest of the Talbots. Before the brothers can reunite, though, one of the other officer patients finds Capt. Bray in the kitchen garden with his head smashed in. When the chief constable and his officious CID are too quick to make an arrest, it falls to the admirable Edith and the likable Lady Montfort to correct the professionals’ errors. After a second murder and a second wrongful arrest, Lady Montfort’s children help her and Edith make sense of clues as disparate as a lunch basket, a trampled bean vine, a portrait, and a draft horse in this snapshot of suffering and healing during the Great War.

The fourth entry by Arlen (A Death by Any Other Name, 2017, etc.) has enjoyable touches of whimsy but a little more substance than its predecessors and is thus more satisfying than the typical country-manor murder.

POPPY REDFERN AND THE MIDNIGHT MURDERS
by Tessa Arlen
Mystery

A DEATH BY ANY OTHER NAME
by Tessa Arlen
Mystery

DEATH SITS DOWN TO DINNER
by Tessa Arlen

THE PRICE OF SILENCE
by Dolores Gordon-Smith
Mystery