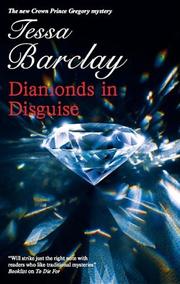 Crown Prince Gregory (To Die For, 2007, etc.) heads to Rome to help his grandmother out of a royal mess.

Deposed from the throne of Hirtenstein, King Anton makes a living teaching horsemanship while his son Gregory books musical events, and Greg’s grandmother, ex-Queen Nicoletta, keeps body and soul together decorating rooms for rich nincompoops. Her latest clients, Ruggiero Ardicci and his wife, Russian opera singer Irina Grushenka, are throwing fits because someone has stolen a diamond-encrusted image of St. Olga from their villa. Rini is convinced that it’s her prayers to the icon that have kept Ruggiero’s delicate digestion on track. But Ardicci thinks that rumors of his Russian Orthodox wife’s devotion to St. Olga will scotch his chances of being named Roman Catholic Italy’s next ambassador to the United Nations. So who better than music impresario Greg to deal with the temperamental diva and her Machiavellian husband? Grossmutti even tempers her criticism of Greg’s lover, fashion designer Liz Blair, to lure him to the Ardicci estate, where murder and mayhem quickly follow. Housekeeper Floria Massigna, a distant cousin of Ruggiero’s first wife, is poisoned; Yuri Tamaldov, Rini’s Russian doctor, is not what he seems; and even Cristina and Ernesto, the cook and gatekeeper, have secrets that only a trip to the neighboring village of Tabardi can uncover.

Barclay offers a genuine puzzle, but as usual, it takes a back seat to local color and royal shenanigans.

TO DIE FOR
by Tessa Barclay
Fiction

A HANDFUL OF DUST
by Tessa Barclay
Fiction

A BETTER CLASS OF PERSON
by Tessa Barclay
Newsletter sign-up