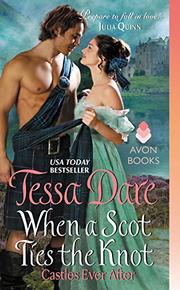 WHEN A SCOT TIES THE KNOT

A young debutante creates a fictional soldier-sweetheart, conveniently away in the war, to avoid a London season, then is stunned when, years later, the embodiment of her imagined beau shows up on her doorstep, prepared to marry her.

Miss Madeline Gracechurch is good with drawing pencils but terrified of drawing rooms and especially crowds, becoming so painfully shy that she literally freezes up, practically unable to speak or move. So, at 16, on the cusp of a London season, she creates a fictional suitor and actually writes to him, Capt. Logan MacKenzie, then spends five years "corresponding" with her fictional love, pouring out her teenage heart and posting letters off, imagining them landing in some enormous lost-mail room. Finally, out of guilt for the long deception she’s created, she kills him off and pretends to go into mourning for her valiant captain, fallen in battle. In the meantime, she’s inherited a castle in Scotland and has established a career as an illustrator for naturalists. So it's something of a shock when one Highland Capt. MacKenzie arrives at her castle with a band of soldiers, ready to settle in, in effect blackmailing her into marriage by threatening to release her letters to a scandal sheet. “We marry for our own reasons, as a mutually beneficial agreement. I get the property. You’ll get your letters back.” Agreeing to a wedding but holding off the consummation, Maddie plans to find and destroy the letters, hence ending his hold over her. As the days pass, however, she discovers the man she created in letters is nothing to the one in the flesh and is astonished to find her own confidence and self-worth blossoming with his arrival and attention. But her fake, resurrected captain has a complicated past and mistrusts things she holds dear. Dare’s latest begins with a fairy-tale twist of fate, then leads readers on a mesmerizing and intense emotional journey that explores love in many forms and the powerful pull of dreams.

A brilliant, enchanting, and soul-satisfying romance.