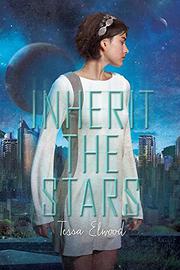 From the Inherit the Stars series, volume 1

The fates of two interplanetary kingdoms hang upon the success of an arranged marriage in this futuristic romance.

In a universe where entire planets are being strip-mined for fuel, the House of Fane has finally created a sustainable energy source for their people. However, they’ve paid a high price for this achievement. Uprisings have left the House’s heir in a coma, a key agricultural planet has been destroyed, and starvation and invasion are now very real threats. Sixteen-year-old Asa is the youngest of the House’s three daughters. When Asa learns her father’s solution to their troubles—a marriage alliance with a rival House—also involves removing her eldest sister, Wren, from life support, she tries to protect Wren by taking their middle sister’s place in the marriage. Predictably, no one is pleased when they discover what she’s done. While this debut is ambitious in scope, neither the characterization nor the worldbuilding feels fully fleshed out. Though Asa’s motivations are well-explored, her new husband, Eagle, remains mostly a cipher, and their eventual attraction and romance seem to be driven primarily by narrative convenience. Much of the science seems implausible, even for a sci-fi setting, and political intrigue and melodramatic family secrets only further muddle the already-busy plot.

Better in concept than in execution.