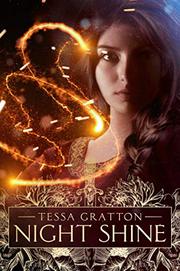 A dark, sensuous riff on “Beauty and the Beast.”

The 100-year-old Sorceress Who Eats Girls has kidnapped the heir to the empire, and only Nothing, a 17-year-old girl who is the prince’s faithful companion, and Sky, his male bodyguard and secret lover, can possibly save him. While this is mostly Nothing’s story, Prince Kirin’s genderfluidity drives the inciting element and continues to be an important thread throughout (although male pronouns are used exclusively for Kirin). Nothing is a mystery to herself and others, but the Sorceress—gorgeously terrifying and playing the Beast role, complete with frequent marriage proposals—seems to know something of Nothing’s past. Threads of identity, choice, and power snake through this lush story, sometimes interrogated (the relationship between Nothing and Kirin), other times mired in sexual attraction (as with Nothing and the Sorceress). The dynamics of age and power differentials in the central sexual relationships are not explicitly addressed and may feel uncomfortable to some readers. The magic and the avalanche of physical details take center stage while the characters move through this cinematic sensory feast slightly out of focus, although Nothing and Sky appeal nevertheless. Many elements of the fantasy world feel inspired by ancient China without being overtly Asian. While race plays no explicit role, human characters are described with a range of skin tones from light to copper, with uniformly dark hair and eyes.

Queer and lush—and appealing and flawed in equal measure.