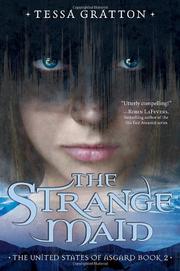 From the United States of Asgard series, volume 2

Can Signy solve the riddle that stands between her and her rightful place among the Valkyrie?

Ten years ago, when she was 7, Signy’s parents died in an accident. In her grief, during a visit to the New World Tree, she climbed the Tree and met Odin Alfather; he renamed her Signy Valborn, handing her her destiny: to become the next Valkyrie of the Tree, one of nine Valkyries who help run the United States of Asgard. The day after her 15th birthday, a riddle appeared on the trunk of the New World Tree; since she couldn’t solve it, Signy set out to find her answer. Two years of sometimes-homeless living later, she’s still looking…until she meets Ned Unferth, who says he can provide her the answer. He says that “The Valkyrie of the Tree will prove herself with a stone heart” means she must kill a troll and take its heart, which becomes stone in daylight. She trusts the truth rune she sees in his eye, and they set off to train and find a troll. Gratton’s follow-up to The Lost Sun (2013) is more entertaining and engaging than its predecessor, but the tale’s padded with so many complications it’s easy to put down. There’s such a surfeit of navel-gazing that Signy should be able to map her own spinal column.

Fans of the first book and lovers of Norse legend may enjoy, but there’s better for fantasy-adventure lovers.