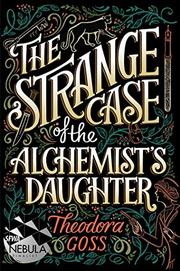 THE STRANGE CASE OF THE ALCHEMIST'S DAUGHTER

The daughters of literature’s most infamous scientists band together in Goss’ (Red as Blood and White as Bone, 2016, etc.) Gothic adventure story.

Goss, who has been nominated for many awards, including the Nebula, and has won the World Fantasy and Rhysling awards, collects characters from titans of her genre and does a little reanimation of her own. When Mary Jekyll, daughter of Dr. Henry Jekyll, finds herself orphaned and penniless, she decides to pursue a police reward for information leading to the capture of her father’s former assistant, the murderer Edward Hyde. With the help of none other than Sherlock Holmes and Dr. Watson, Mary follows the trail and soon finds herself the ringleader of a troupe of young women who have been cruelly experimented on by the likes of the doctors Rappaccini, Moreau, and Frankenstein. Giving these young ladies much-needed agency is such a ripe premise for a novel that it's frustrating to see them suffocate under Goss' decision to have them recount their stories of origin. Between an overreliance on the referenced novels, a distracting literary device in which characters comment on each other’s stories, and allusions to a wider mystery, there is no room for the characters to have the independent characterizations they so richly deserve. One hopes for further installments if only to give them room to breathe.

Despite a potential-laden premise that stands out from the many character-mashup stories on the market, this collection of parts fails to come alive.