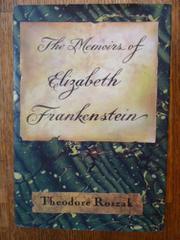 THE MEMOIRS OF ELIZABETH FRANKENSTEIN

Few would argue that Mary Shelley failed to produce a pop- culture classic when she penned Frankenstein. Roszak (The Voice of the Earth, 1992, etc.), by contrast, has done the impossible: He's taken Shelley's unsettling allegory of human arrogance and, sad to say, made it a marathon bore. Seizing on Shelley's radical lineage (as the daughter of protofeminist Mary Wollstonecraft), Roszak attempts to rewrite the Frankenstein tale from the perspective of Elizabeth, Victor Frankenstein's adoptive sister and fiancÇe. The author's conceit is ponderous: Polar explorer Robert Walton, Victor's raconteur in Shelley's original, continues his involvement with the Frankensteins' bizarre lives well after Victor's death by editing Elizabeth's memoirs. Walton goes way back, to Elizabeth's rescue from a squalid gypsy camp by the Baron Frankenstein and his wife, Lady Caroline. Spirited away to a grand Swiss estate, Elizabeth meets her new brother, Victor, and develops an immediate attraction. It isn't long before Lady Caroline, a big Rousseau fan, begins to encourage Elizabeth to embrace nature and scorn reason. This should be a problem for the Baron, whose education of Victor endorses Voltaire, science, and Natural Law, but he lets it slide. While Victor is busy killing butterflies and wandering the mountains like a little Nietzsche, Elizabeth is initiated into Caroline's coven of witches, whose members have devoted themselves to the ancient rituals of alchemy. Eventually, both children fall under the daft instruction of Seraphina, a wizened hag who mixes Elizabeth's menstrual blood with Victor's ejaculate in an effort to establish a Platonic oneness for the two. Sounding like a combination of Anne Rice and Camille Paglia (earth-mother bacchantes cavort beneath the moon while Seraphina guides Elizabeth and Victor through Eastern sex techniques), Roszak finally gets around to introducing the monster—on page 373! Even Mel Brooks couldn't save this one. (Author tour)