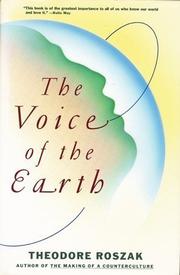 THE VOICE OF THE EARTH

Repeatedly, in this scholarly survey of cultural history, Roszak (History/California State Univ.; Flicker, 1991, etc.) evokes a back-to-nature philosophy, contrasting the rational philosophy of the Enlightenment with the romanticism of the noble savage; prehistoric animism and earth-mother religion with the rise of patriarchy and male-dominated, nature-dominating religion. All this by way of elaborating what he sees as the only salvation of the ecological crisis: a new ``ecopsychology.'' The new school celebrates the individual, seen in harmonious interrelationships with the family, society, Mother Earth, and, ultimately, the cosmos. Ecopsychology is informed by various post- Freudian schools: some Jung (collective unconscious), and something of Reich, Maslow, Gestalt psychology, and various California-style movements—in general, those schools that look upon the unconscious as the well-spring of creativity. ``The core of the mind is the ecological unconscious,'' Roszak says, containing ``the living record of cosmic evolution, tracing back to distant initial conditions in the history of time.'' Yes, time's arrow and the evolution of the cosmos figure large in Roszak's philosophy. Taking the Big Bang as a given, and borrowing arguments from systems theory, the Gaia hypothesis, and the anthropic principle, he sees the emergence of humanity as inevitable in the grand scheme of things. It follows, then, that we must get back on track with Mother Earth. How to do this finds Roszak lamenting urban- industrial society. Cities are bad. Deep ecology is good. The restorative work must begin in childhood, and must involve a breaking away from macho ideas and the invoking of some concepts of ecofeminism. Roszak turns a fine sentence and knows his history (if not his science), but his idealism pays no mind to the population problem, poverty, disease, or rising racial-ethnic conflicts; and it dismisses the cultural largesse of cities and pays scant homage to what science and technology might do. In short, there seems to be more wish than reality here.