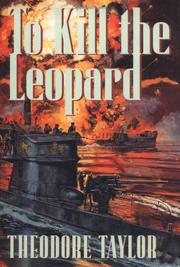 TO KILL THE LEOPARD

Realistic submarine suspense, set in WW II, by Taylor (Monocolo, 1989; The Stalker, 1987), who's also written a number of YA novels (The Weirdo, The Cay, etc.). An exercise in simultaneity, this leaps from scenes aboard a Nazi U-boat to scenes on freighters sailed by American merchant mariner Sully Jordan to scenes in Lorient, France, where the Resistance works against the Occupation. At first, the US has not yet entered the war, but its lend-lease vessels carrying tonnage for the British are being sunk ever more rapidly by German U-boats, especially one captained by glory-obsessed Horst Kammerer. On his conning tower are painted two brilliant, snarling leopards that become more and more feared. Meanwhile, Sully has two tankers blown away beneath him, the first when his tanker enters the Death Hole— a section of the North Atlantic unprotected by air cover and where debris from sunken ships floats everywhere. His father accompanies him on the second ship and freezes to death in a lifeboat after father and son survive another sinking. Sully himself is badly nipped by frostbite, losing his ears, some fingers and toes. He returns to the sea as master of a Navy Q-boat, a tanker redesigned as a warship and used as bait to attract a submarine within range of its masked guns. Back at the big Nazi submarine base at Lorient, Kammerer unwarily gives information to his French mistress, who passes it on to the British, who can then track ``The Leopard.'' Creaks with seagoing detail, weather, storms, and battle at sea. This may not be The Cruel Sea, but it has its spell. You really are there.