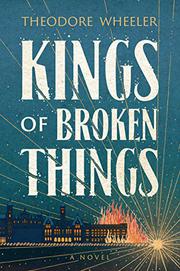 A detailed, dark novel about the complicated social dynamics in Omaha during the “Red Summer.”

Set during the end of World War I (1917-1919), this book captures the turmoil and terror of the era: soldiers returning broken, criminals running cities from the underground, poverty and prostitution rampant, lynch mobs fueled by racism and illegal liquor desperate to blame someone. It centers around three interconnected characters: Karel Miihlstein, an 11-year-old immigrant from Salzburg who lives with his father and three sisters, one of whom is very sickly; Jake Strauss, a 20-year-old lodger at the Miihlsteins’ who fled his hometown of Jackson County after he beat a man with a pick handle; and Evie Chambers, a kept woman who is passing for white and with whom Jake falls in love. Karel becomes obsessed with baseball and falls in with some delinquents. Jake, too, joins a rough crowd after coincidentally killing a man wanted by the mob boss, named Tom Dennison. He is indoctrinated into the group of “hard-drinking, chain-smoking, whore-mongering men who’d landed where they belonged.” These men, who make up “the machine” of political corruption and criminality, control the city. Wheeler (Bad Faith, 2016, etc.) paints a vivid and dynamic portrait of Omaha during this strained and sad era. Underlying the novel is a taut racial division, illustrated by the yearly interrace baseball game and culminating in a false accusation which incites a sickeningly vicious lynch mob. For its descriptions of the violent outcomes of prejudice and political misconduct, this novel at once illuminates a savage moment in history and offers a timely comment on nationalism and racism.

An unsettling and insightful piece of historical fiction.