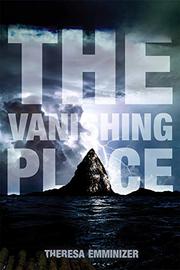 A quick outing in a borrowed boat becomes a terror-soaked nightmare for a group of teens.

Cast into short bursts of confessional free verse, the tale opens with four young people meeting on a Florida beach and setting out for a joyride—which turns deadly with the onset of a sudden squall that leaves one dead and the others stranded on a deserted island with virtually no supplies. As they take up the narrative oars, each in turn reveals a distinctive mix of traits and histories—Nate is moody and serious; his buddy Jay hides the emotional wreckage of childhood abuse beneath the facade of a carefree party boy; Brooke is the outgoing one; and Eva, her friend from back home in Pennsylvania, though timid in company, turns out to be the most resolute and heroic of all. The plot ends on a wave of narrow squeaks as, after weeks with no sign of rescue, the survivors set off on a bamboo raft…only to be driven back to the island by a big shark and, later, another ferocious storm. Emminizer cuts her debut novel off in an abrupt ending that may bring some readers up short but will at least spark discussion about how things will turn out. The characters are all cued as white except for Eva, who is Latinx.

An adventure story for reluctant readers driven by high winds of melodrama.