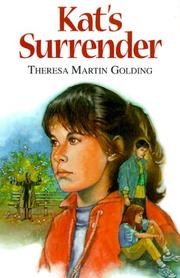 A novel that skillfully pits a teenager against nearly insurmountable sorrows following the death of her mother. Kat, 13, whose mother died of cancer, has withdrawn from the world. As she tries to ignore her old friends, she makes a new one in the General, an elderly man who feeds pigeons and lives in a fantasy. Kat finds she can’t avoid her old friends entirely; she still sees her best friend, Maggie, who believes that a next-door neighbor, Mrs. Twitchell, is a malevolent witch, a notion Kat accepts. Calamity strikes again when Maggie is injured in a hit-and-run accident; the General is the guilty driver. Kat loses her only remaining friend, Paul, when she tries to defend the General. Only a strict teacher, Sister Mildred, offers any sympathy, but it’s not until Kat falls off a ledge and into Mrs. Twitchell’s apartment does she learn that everyone has some tragedy, and that life can be good when it is faced with courage. Golding displays solid knowledge of adolescent girls, and her story has enough excitement and mystery to interest many of them. (Fiction. 10-14)