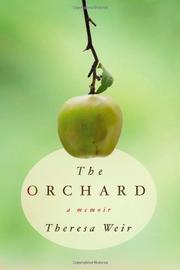 A foreboding memoir of the author’s early marriage into an agricultural family, and her emotional navigation between rootlessness and heritage.

In a key passage, novelist Weir (as Anne Frasier: Garden of Darkness, 2007, etc.) writes that “in that moment I understood that I’d stepped into a world I could never be a part of.” How could a citified woman, whose mother struggled with revolving-door relationships and an itinerant lifestyle, forge an enduring bond with a man whose apple-farming family was governed by appearances? The author dances around questions of belonging and trust as she compresses her outsider beginnings on her husband’s land with the years preceding his death, all while alternating between memories of a 1960s childhood. Threaded with abandonments and “[v]ery bad things that I will never talk about,” the jagged pastiche reveals a woman whose impetuous decision to marry a man she barely knew led to love, children and the tough realization that generations of pesticide-spraying would destroy her newly reconciled peace. Weir ably captures the stasis of rural life and the pain of difference with acuity, though the impact is diluted when in-laws and other characters emerge as archetypal rather than fully fleshed figures. The author frankly admits to deeply subjective interpretation, however, acknowledging that “[s]ometimes there are people you must forget because of the damage they cause—blood ties or not.” Recurrent hints of environmentally dangerous activity never quite develop into a parallel theme, remaining instead as touchstones for a narrative that reaches a crescendo with cancer diagnosis. The strongest feature of the book is the determined loyalty that allows Weir to discover beauty amid strife, as well as the touching conclusion.