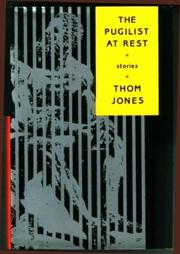 THE PUGILIST AT REST

These 11 mostly hard-luck stories, with their mean and nutty existential heroes and their punch-drunk visions of hell, place Jones right among the literary heavyweights. In many of these gritty tales, first-timer Jones displays the peculiar genius of the autodidact—someone who contemplates the great ideas on his own, and tests them against the rawest of everyday experiences. And rawness is all for the Vietnam vet at the center of three tales here. The title piece, a masterpiece of the form, taps the ``reservoir of malice and vicious sadism'' in its narrator's soul: in country, this madman brawler thrives on the rush of violence and the pure adrenalin of survival. In ``Break on Through,'' a psycho in the narrator's recon team finds redemption inches from death. But in Jones's dark world, it's only temporary: ``human behavior...is an abomination.'' ``The Black Lights,'' set in a vet neuropsych ward, is a harrowing tale worthy of Chekhov, as the narrator chronicles his unmanning by grand mal seizures, depressions, and drugs. Just when you think Jones might strike a lighter note in ``Wipeout'' or ``Mosquitos,'' he reveals his funny, bleak view. One narrator seduces women with his ``irresistible sort of psychopathic charisma,'' the other grudgingly seduces his brother's haughty wife. Equally edgy and disorienting, ``Unchain My Heart'' pokes fun at pantywaist editors while it explores, from a woman's view, the appeal of strong and courageous men. The only nice guy in ``Silhouettes'' is a retarded janitor; he's a ``noble innocent,'' and of course exploited by everyone. Life is ``the trip, the only trip'' for an insane, suicidal boxer (``as of July 6th...''); a cancer patient on her deathbed (``I Want to Live!''); and an advertising genius wandering Bombay in an epileptic fugue (``A White Horse''). ``Rocket Man,'' with its Nietzchean splendors, takes you down for the count. Dizzying combinations of prose punches with abstract bobs and weaves: a knockout.