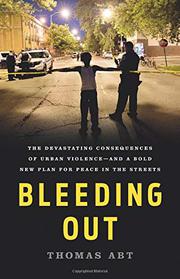 A study of how to reduce gun violence in low-income urban neighborhoods, a step the author sees as a necessary precursor to bringing neighborhood residents up from poverty.

Abt is well-positioned to make his arguments: He is currently a research fellow at the Harvard Kennedy School of Government. Previously, he was a policymaker in Barack Obama’s Justice Department and studied urban violence in the administration of New York governor Andrew Cuomo. In addition, Abt has viewed gun violence as a Washington, D.C., high school teacher and as a New York City prosecutor. The author opens with an emergency room triage analogy: Doctors must halt a patient’s bleeding before even considering long-term recovery options; likewise, various parties must pull together to stop gun violence before moving on to broader solutions regarding employment, better wages, and other factors taken for granted in safer enclaves. In this “work of forward-looking pragmatism,” Abt skillfully mixes academic research, information about previously instituted pilot programs, and interviews with families devastated by gun-related homicides to propose a multistep solution that he believes will reduce gun deaths in cities across the country. The author argues that identifying individuals who carry out the violence as well as specific neighborhood corners where much of the shooting occurs constitute straightforward tasks. A mixture of prevention and punishment is vital, and Abt is confident that academic theory and street knowledge can coexist. “Perhaps surprisingly to some,” he writes, “social scientists and the street are largely in agreement on urban violence, one reinforcing the other as they see the same phenomenon through different lenses, with each perspective being necessary but not sufficient for a full understanding of the issue.” The author also addresses relevant issues of race and class, noting that “violence is not simply a manifestation of poverty; it is a force that perpetuates poverty as well.”

A useful addition to the necessarily growing literature on urban violence.