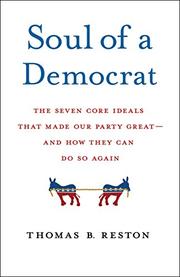 SOUL OF A DEMOCRAT

by Thomas B. Reston

The Democratic Party must refocus its efforts against the Republican Party, showing that their values are different and that the game is rigged.

Providing plenty of historical context, Reston, son of famed New York Times editor James Reston and a two-time secretary of the State Democratic Party in Virginia, argues that his party has lost its way—and perhaps even its soul. It has become divided into identity-politics blocs which too often fight with each other rather than unite against the opposition. It must return to first principles, writes the author, to the inspiration of Jefferson and Jackson, James Polk and Manifest Destiny, William Jennings Bryan and his evangelical exhortations toward politics based on morality, the eloquence of Adlai Stevenson, and the ebullience of Hubert Humphrey. “Without its founding myths, the Party wanders,” writes Reston, a former aide to President Jimmy Carter, with whom he doesn’t seem much impressed. Though he attempts a balance between pragmatism and idealism, urging that Democrats must again become the party of the white working class that shifted much of its support to Donald Trump, he never really gets specific about how his expansive, big-tent approach will heal the party’s fault lines; it will be difficult for those on the opposite sides of the abortion debate or immigration issues to set aside their polarized differences for the greater good of the party. “It’s more difficult to be a Democrat,” he concedes. “We are operating inside a vast and diverse coalition of ideas and ideals, and usually our opponents are not. Therefore, our task as Democrats is to imagine and encompass the nation as a whole, not just one or two narrow and cohesive slices of it. For this reason, we have to be purposeful in seeking out and embracing our own internal contradictions.”

A manifesto that looks to the past to find direction for the future.