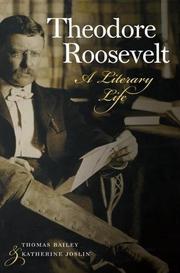 The author of more than 35 books and 150,000 letters found time to be 26th president of the United States.

Theodore Roosevelt (1858-1919) was a prolific writer throughout his life, producing journals, accounts of his travels and adventures, essays, countless speeches, histories, and letters. As Bailey (Emeritus, English and Environmental Studies/Western Michigan Univ.) and Joslin (English/Western Michigan University; Edith Wharton and the Making of Fashion, 2009, etc.) argue persuasively, Roosevelt took enormous pride in being a writer, overseeing all aspects of publication, taking pains to hone a vigorous style, and never losing sight of his audience, nor of the image he wanted to convey. “In his opinion,” the authors write, “for him to be accurately seen and appraised by the world is to be seen and appraised as he wishes.” The authors clearly admire Roosevelt’s literary energies: during the year he served as governor of New York, he and his wife lived on his earnings as a writer of numerous magazine pieces and three books, including his famous military memoir, The Rough Riders. During his two terms as president, he published an astonishing five books. A voracious reader with “eidetic memory” as well as a tireless writer, Roosevelt was “our literary man in the White House.” Critics and fellow writers praised him: Walt Whitman, for one, admired Roosevelt’s Ranch Life and the Hunting-Trail for capturing the essential spirit of the “wild Western life” with “a little touch of the dude.” Offering close readings of many important works, the authors make a strong case for their assessment of Roosevelt’s “probing and controlled language” and the robust prose that reflected his spirited outlook. Even when “deeply saddened,” he acted “as though he were bursting with joy and optimism.” Not all of Roosevelt’s writing was successful: his autobiography, for example, with chapters farmed out to contributors; “self-aggrandizing” essays; and some late works, especially those stridently critical of Woodrow Wilson, which are marked by “shrillness and fury.”

A fresh and perceptive analysis of Roosevelt’s contributions to literature.