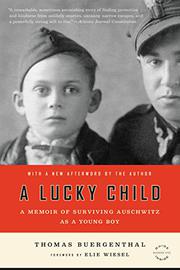 A Memoir of Surviving Auschwitz as a Young Boy

A powerful Holocaust memoir from an International Court Judge in The Hague.

First published in Germany in 2007, the book revisits Buergenthal’s youth in the late 1930s when he and his parents were forced by the Nazis to leave their home in Lubochna, Czechoslovakia, where they owned a hotel. After a short period in the Polish ghetto in Kielce, they were transported to Auschwitz in August 1944. The author was five when he was first uprooted in 1939, and he attributes the family’s early survival to his parents’ cunning and sheer luck in the face of the “Nazi killing machine.” Though his mother was stripped of her German citizenship because of her Jewish heritage, her ability to speak fluent German allowed her to pass through borders relatively obstacle-free. His father’s knowledge of Polish, work in the ghetto Werkstatt (a workshop or small factory) and fair hair were also important factors in their avoidance of the SS. During the journey to Auschwitz, Buergenthal lost sight of his mother. At the camp, the boy witnessed horrendous violence, sickness and death, and survived by running errands for the Kapo who supervised the showers. Separated from his father—whom he never saw again—taken to the hospital camp and marked, he believed, for death, Buergenthal was befriended by a young Polish doctor who saved him. He endured the Auschwitz Death Transport to Sachsenhausen, where the Russians eventually liberated the survivors. Only 11 years old, he briefly joined a Polish scout company before being delivered to an orphanage in Otwock, Poland. A year and a half later his mother finally located him. The author’s story is astonishing and moving, and his capacity for forgiveness is remarkably heartening.

An important new voice joins the chorus of survivors.