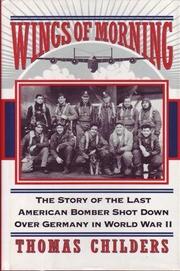 A poignant story of a B-24 crew from the selection and training of its members through their spine-tingling combat raids over Germany in WW II. Childers (History/Univ. of Pennsylvania), a nephew of crew member Howard Goodner, has sifted through hundreds of wartime letters between the 12 men and their loved ones. In addition, he has persevered in meticulously researching Air Corps and other government records, wresting spare information from an indifferent bureaucracy, visiting family members of the crew, and doing research in Germany. Narrating mainly from the standpoint of his uncle (who did not survive the bomber's final mission), Childers tells the story of the Black Cat, an inauspiciously named plane in America's Eighth Air Force that, in the last few months of the war in Europe, was engaged in supporting ground troops in the final offensive against Nazi Germany. The Black Cat had 22 successful missions, sustaining only minor damage. On the stormy day of April 21, 1945, shortly before the German surrender, the crew departed on a mission to bomb a bridge, no more than ten feet wide, near Salzburg, Austria. Sending the plane up in weather so bad that the pilot could not locate the target was only one of the erroneous command decisions made that day. After the mission was canceled, the commander disregarded the warnings of the navigator and directed the bomber to return over Regensburg, a town covered by heavy German anti-aircraft fire. The bomber was shot down, and all but two of the crew perished. Childers tells his true and tragic story with both the narrative flow of fiction and a you-are-there immediacy. A fitting memorial to the crew of the Black Cat.