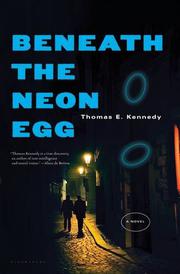 BENEATH THE NEON EGG

With this fourth stand-alone volume, Kennedy’s Copenhagen Quartet draws to a desultory close.

Bluett, the protagonist, has much in common with the Kerrigan of Kerrigan in Copenhagen (2013), this novel’s predecessor. Both are Irish-American expats, long resident in the Danish capital. Both put away impressive amounts of alcohol. Kerrigan was a writer; Bluett is a translator of catalogs and such. Now 43, a young Bluett came to Copenhagen because it was a haven for jazz cats. Miles, Bird, Trane: These are Bluett’s gods. (It’s a shame the music’s energy doesn’t infuse this account of his life.) A young man’s passion also propelled him into marrying the Danish Jette. The marriage soon soured, but it did produce a boy and a girl, Bluett’s treasures, now grown and at university. Bluett’s divorce a year ago, in 1996, liberated him, yet he’s a lonely guy, at loose ends. His only friend is his neighbor Sam, another American translator. He likes Denmark, appreciates the generous welfare benefits, but is it really his home? Danes still seem cool, distant, unknowable. Kerrigan profiled the city as a rich cultural repository, proud of the legacy of Andersen and Kierkegaard. By contrast, this is a one-dimensional work focused on Bluett’s love life, which is all stumbles. He rekindles a relationship with an old flame only to ruin it through his arrogant inattentiveness, which he can't acknowledge. Then Kennedy whips up some melodrama. Sam’s son finds him dead, a suicide after a cancer diagnosis. No, wait, that diagnosis never happened. Sam had left his assets to a Russian “dancer” at a clip joint who had bewitched him. Murder, then? But there’s no police investigation, and all Bluett’s sleuthing earns him is some cracked ribs.

It’s a mess and offers little relief from the dreary solipsism that is the novel’s hallmark.