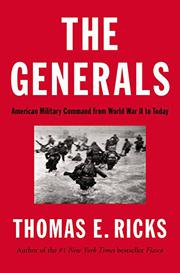 Foreign Policy contributing editor Ricks (The Gamble: General David Petraeus and the American Military Adventure in Iraq, 2006–2008, 2009, etc.) assesses the state of generalship in the U.S. Army and finds it wanting.

During World War II, Gen. George Marshall designed a template for identifying leaders and selecting generals, rapidly promoting those who met the standard and readily relieving underperformers. For Marshall, firing a general was part of the natural order, a necessary tool of personnel management in the notoriously difficult business of battlefield success. How is it, asks the author, that we’ve fallen away from this strict standard over the past 75 years? After acknowledging the occasional flaw in the Marshall system and identifying the grand exception, Douglas MacArthur, Ricks turns to the Korean War, where only O.P. Smith and Matthew Ridgeway met the Marshall standard and prevented disaster. Post-Korea, senior officers acted “less like stewards of their profession, answerable to the public, and more like keepers of a closed guild, answerable mainly to each other.” In Vietnam, the system collapsed entirely, with rotation, ticket-punching and micromanagement the norms. Relieving a general came to be seen as a system failure. From this low point—Ricks recites the manifold sins of Maxwell Taylor, Paul Harkins and William Westmoreland—the Army retooled, improving training, doctrine and weaponry, but leaving its concept of generalship untouched. As the author turns to our recent wars in the Middle East and Afghanistan, none of  Colin Powell, Norman Schwarzkopf, Tommy Franks, Ricardo Sanchez, or George Casey will much appreciate what Ricks has to say about continuing deficiencies in military leadership. Only David Petraeus and Raymond Odierno emerge unscathed.

Informed readers, especially military buffs, will appreciate this provocative, blistering critique of a system where accountability appears to have gone missing—like the author’s 2006 bestseller, Fiasco, this book is bound to cause heartburn in the Pentagon.