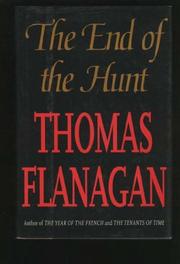 THE END OF THE HUNT

Award-winning novelist of Irish history Thomas Flanagan (The Tenants of Time, 1988, etc.) sets his new novel, as densely packed and relentlessly thorough as usual, in the turbulent 1920's, an era whose legacy lingers today in strife-ridden Northern Ireland. The complex story is told in alternating chapters by such characters as Patrick Prentiss, a barrister who lost his arm fighting for the British in World War I; Janice Nugent, a young Irish widow whose husband died fighting at Gallipoli; Christopher Blake, a historian and soon Janice's lover; and the mysterious Frank Lacy, a ruthless soldier whose bedtime reading is Virgil. As is typical in docufiction, a slew of real characters such as Winston Churchill, Lloyd George, and Eamon De Valera, speaking often in their own words or at least uttering sentiments in keeping with their reputations, make numerous appearances to add gravitas to the narrative. Beginning in the spring of 1918, members of Sinn Fein, survivors of the 1916 Uprising, and supporters of Irish Independence form the Irish Republican Army and begin a war that is fought on all sides with ruthless ferocity. The notorious British ``Black and Tans'' are just as savage as the IRA in mounting ambushes, exacting reprisals, and burning enemy houses. As the war continues, Frank Lacy achieves stunning military successes, Christopher Blake does brilliant intelligence work, while Prentiss and Nugent observe and comment from the sidelines. The story, though, is dominated by the legendary and beloved Michael Collins, a man of a thousand disguises and daring ruses. For signing an accord with Britain in 1921 establishing the Irish Free State, Collins is regarded as a traitor by diehard Republicans and is assassinated. A nasty little war with even nastier consequences, deftly described with enough details to satisfy those who prefer their history lightly spritzed with fiction.