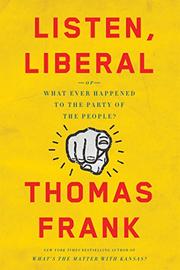 Or, What Ever Happened to the Party of the People?

How the party of the working class has switched its focus to well-heeled professionals, more concerned with social issues than economic inequality.

“This is a book about the failure of the Democratic Party,” writes political analyst and Baffler founding editor Frank (Pity the Billionaire: The Hard-Times Swindle and the Unlikely Comeback of the Right, 2011). “What ails the Democrats?” he asks. “So bravely forthright on cultural issues, their leaders fold when confronted with matters of basic economic democracy.” Where David Halberstam once showed how reliance on “the best and the brightest” resulted in wrongheaded decisions on Vietnam, Frank builds a similar case for economic policy, as Ivy League presidents (Bill Clinton, Barack Obama) have surrounded themselves with Ivy League advisers whose perspectives aren’t those of what was once the blue-collar base of the Democratic Party: “Thus did the Party of the People turn the government over to Wall Street in the years after Wall Street had done such lasting damage to…well, the People.” Frank is particularly acidic on the Clinton presidency, calling his cabinet “a kind of yuppie Woodstock, a gathering of the highly credentialed tribes,” and claiming, “what he did as president was far outside the reach of even the most diabolical Republican.” In the author’s estimation, the hope of the Obama administration turned hopeless. Since Frank is far from a lone voice in the wilderness in his perspective, you’d think he might see allies in the Occupy movement and the Bernie Sanders campaign, but he barely acknowledges the former and makes no mention of the latter, making it seem as if more recent developments lie outside his analysis. Rather than insisting on radical reform from the left or even a third party alternative, he seems to feel that Hillary Clinton is inevitable: “I myself might vote for her,” because it would be a “terrible thing” if any of the Republicans became president.

A hard-hitting analysis that may leave readers confused by the author’s ambivalent, punches-pulling conclusion.