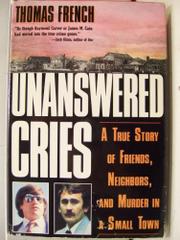 A True Story of Friends, Neighbors, and Murder in a Small Town

A solid re-creation of the rape-murder of Karen Gregory in Gulfport, Florida, and of the resulting trial, by the reporter who first covered the case for the St. Petersburg Times. On May 22, 1984, 36-year-old Karen, white, a graphic artist, had just finished moving her things to the house of her black boyfriend, David Mackey, an administrator of a counseling program for Vietnam veterans—and out of town at a conference. In small, conservative Gulfport, the interracial couple ``stood out.'' That night, a woman's scream was heard by a number of people as far as several blocks away; one man said, ``I'll never forget it,'' But no one called the police. Thirty-one hours later, roused by Mackey, who was unable to reach Karen by telephone, the Gulfport police broke in and found her bloody body, stabbed to death many times. So began a long, tedious, often dead-ended investigation led by Sergeant Larry Tosi. French takes the reader through it step by step, revealing what Tosi learned just as he learned it, bit by bit, with a frustrating lack of evidence at first, false suspects, unexplained details, and confusing polygraph tests. Finally, a suspect—ironically, a friend of Tosi's and known for his good works as ``the neighborhood helper''—was arrested; though never confessing to the crime, he was convicted and is currently doing time. Crisp and clear, with vivid characterizations and with the intricacies and frustrations of the police investigation and subsequent trial well explained.