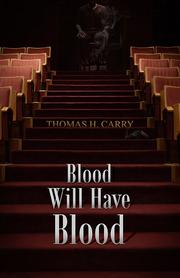 BLOOD WILL HAVE BLOOD

When struggling actor Scott Russo and his dealer, Freddie, arrive at Tobias Milton’s SoHo apartment to start Scott in a new job as a marijuana delivery runner, they show up in time to witness Irish mob boss Aidan Murphy’s takeover of Milton’s marijuana business. On his train ride home that night, Scott reflects on his “own shortcomings as an actor and the futility of my stagnant career.” When Aidan summons Scott to Hell’s Kitchen for a meeting, Carry keeps readers in a state of anxiety and uncertainty about Scott’s future. The criminal tells Scott that the young man has a gift—an observational detachment that allows him to “function when you’re about to shit your pants”—which comes in handy when witnessing violent murder. Throughout the novel, the protagonist’s first-person commentary about the world around him gives this satirical work its heft. When describing how he lost a job as a waiter for eating part of a customer’s appetizer, for instance, Scott describes his supervisor’s face in vivid, cinematic slow motion: “her right eye twitched and her jaw muscles vibrated with tension.” In addition to mocking the restaurant world, Scott effectively ridicules aspects of his artistic calling; other actors are “a stupid, narcissistic bunch” with “self-absorbed, deluded brains,” and his acting coach, Allison Rucker, is portrayed as an alcoholic crackpot. Throughout, Carry adheres to Chekhov’s famous rule—if a gun is present in a scene, it must eventually go off—and every scene in this novel moves the story along in a meaningful way. The author’s ability to control the novel’s pacing and keep it uncluttered will appeal to fans of classic noir.