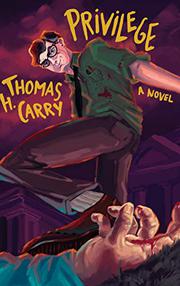 A restless college educator finds himself in deep trouble after he commits murder in this suspense novel.

At 43, Danny Waite, a university film studies professor, has hit a wall in both his career and his personal life despite having a loving wife, Abbie, and a reliable best friend, Paul Vartan. This stifling stagnancy is most apparent in the classroom, where he ends lectures prematurely and doesn’t penalize lazy students for late assignments. He lacks motivation to shake things up and dejectedly contemplates the movie posters gracing his office walls as he resents his arrogant academic colleagues. In this brisk novel about the hazards of idle hands, debut author Carry carefully and coyly sets the stage for the unbridled mayhem to come. The stultified professor’s situation is irreversibly altered by the unexpected arrival of teaching assistant Stacy Mann, a bisexual, e-cigarette–smoking film-program undergrad who swoops in and upends everything in Danny’s life. Danny finds himself in Stacy’s apartment getting drunk and stoned until they get in a fight that becomes so violent that he strangles her to death. A foolproof coverup scheme has police convinced of his innocence, but when another student suspects foul play, Danny adds another corpse to his body count and “intractable situation.” Blatant infidelity also enters the plot, but it’s never fleshed out, as Danny has bigger situations to resolve. He ultimately turns out to be an expert at playing “the man with nothing to hide.” Over the course of this novel, Carry cleverly keeps things crisply detailed and moving at a brisk pace. Readers will find the story to be gripping from beginning to end as Danny struggles to get away with his crimes and further twists complicate matters. Carry has managed to produce a story that’s brief enough to finish in one rapt sitting, and it will be engrossing for classic film buffs, teachers, and other readers who appreciate protagonists who wade into the murkier waters of life.

A thoroughly entertaining, spring-loaded tale of one man’s lethal remedy for middle-age boredom.