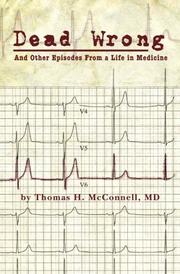 And Other Episodes from a Life in Medicine

McConnell is a professor of pathology who admits he dislikes doing autopsies, and as we read his slice-by-slice replays—“When I cut into her abdomen and an odious rush of feces spilled from the incision”—we can’t really blame him. His 50-year career landed him in plenty of scrapes outside of the morgue as well. A stint as an Army doc found him jumping out of airplanes, performing a circumcision on an uncooperative paratrooper and standing vigil over the casket of President Kennedy. (An assassination buff ever since, he offers tart commentary on the competence of the military pathologists who autopsied Kennedy and floats an intriguing alternative to the “magic bullet” theory.) There are vacations filled with impromptu consultations; on one Grand Canyon rafting expedition, he treats heat stroke, panic attacks and a bite to the butt by a rattlesnake. In a noir-ish vignette, he testifies in an abortion prosecution before a vaguely corrupt Mississippi courtroom. And there are many scenes of McConnell performing a doctor’s most basic task—struggling to figure out what’s ailing a patient, sometimes in the reflective quiet of the pathology lab, sometimes in the chaos of the emergency room. The author fills the book with absorbing medical procedural that presents medicine as an intellectual puzzle with its share of triumphant deduction and humiliating cluelessness. (One case, resolved only after umpteen lab tests and a home visit that reveals a tell-tale enema bottle, is a diagnostic mystery worthy of a House episode.) This is mainly a collection of vivid shaggy-dog stories, but there’s also an emotional resonance to McConnell’s reminiscences; as he wrestles with his patients’ suffering, he reveals that the physician’s anguish is also inherent in the art of healing. Engrossing in every sense.