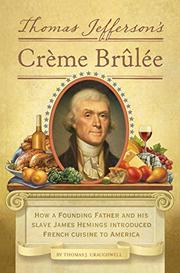 When Jefferson was appointed as minister to France, he took along his slave, James Hemings, with the intention of having him trained by the best French chefs. He promised Hemings that when they returned to Virginia and he had trained a successor, he would be freed. France did not recognize slavery within its borders and James could have sued for his freedom, but he chose to stay with Jefferson and complete his training. Jefferson used his new chef to host storied dinners in Paris, successfully negotiating political and economic agreements as his guests dined. With only two servants, Jefferson set out from Paris in 1787 to explore the bounty of France. Nearly four months later, he returned with cases of wine, fruit tree saplings, seeds for unusual vegetables and rice smuggled from Lombardy in northern Italy. Instead of the promised freedom, Jefferson retained Hemings as chef during his term as secretary of state. We can thank Jefferson for not only the appreciation Americans developed for champagne, but also the techniques and dishes that Hemings introduced to his guests. Pasta, sauces, fried potatoes and even macaroni and cheese were served along with new types and strains of vegetables America had never seen. Craughwell provides a delightful tour of 18th-century vineyards still in production, a look at French aristocrats just before the Revolution and the France that paid little attention to the color of a man’s skin.

A slim but tasty addition to the long list of Jefferson’s accomplishments.